How to peek through doors in Modern Warfare

This Shit Is Bananas

So who’s ready for a review of an open-world zombie crafting, building, survival game. Say that a little tongue in cheek because I like seven days to die. Though it’s easy to instantly take a look at the quality of the graphics and animations and assume it’s some disgraceful...

7 Days to Die is an open-world zombie survival game with shitty graphics. Don’t let that last statement kill your excitement, its the saw movies of Minecraft and that’s why its so fun. After all would wicked monkey stear you wrong? we don’t back trash survival or shooters.

So who’s ready for a review of an open-world zombie crafting, building, survival game. Say that a little tongue in cheek because I like seven days to die. Though it’s easy to instantly take a look at the quality of the graphics and animations and assume it’s some disgraceful cobbled together mess of a video game. That is somewhat correct but at the same time not quite right. I think it’s a game that is worth a look, but it’s certainly not a game for everybody.

For starters, it released over five years ago as an early access game on steam. It released within a few days of Dayz opening up. The premise is pretty simple. It’s an open-world exploration game where you fight zombies and gather items to craft better and better stuff. Build a base and make your character stronger. The game has no real story, no characters, do the things you find enjoyable.

You begin your journey with nothing, but as you craft, loot, and explore, you become stronger until you are a walking armoury with a house full of stashed supplies. The game can be played solo or in multiplayer. You can play on either a randomly generated world with all of the questionable polish that entails or you can play on a pre-generated map. Either way, you can adjust the options for difficulty, daylight, time, and experience mounts. As you play the game, your character will experience effects, and you manage their health, stamina, and other attributes. As you swing weapons, Sprint or jump you drain your stamina and your character becomes vulnerable to the hoards of zombies.

Your health is the same as other games if you lose all your hit points you die. You will respawn nearby and have to go back to your death location to collect all your loot. Your character must also manage their temperature through the use of shade, fire or heat sources. Types of clothing can either cool you off or help you stay warm. It confers negative statuses to your character that can lead to death if not treated. Same for sicknesses and infections. Your health and stamina is determined by the attributes you gain by levelling up. Over time, this lowers how often you have to eat or apply medical.

Weapons and armour are crucial to your experience in the game. You might begin with a stone axe and a primitive bow, but as you level you eventually craft much more. Equipment does degrade over time and will eventually break. Repairing most materials is reasonably simple, requiring a minimal level of upkeep. The weaponry like guns generally takes repair kits to keep running, which is a slightly more valuable resource.

Exploring the world is the central part of the game and looking through different buildings from bars to businesses, houses, and factories. Each of them constructed from the games limited graphical architecture. Some areas are more complex than others and almost act like mini-dungeons full of hidden stashes and lurking zombies. While you explore, you will encounter crafting materials and usable items, medical supplies, and magazines that temporarily buff your attributes. The best upgrades are weapons and armour, mods for your equipment and magazines for your guns. 7 Days to Die also offers the ability to buy and sell unwanted items to traders. Not all enemies in the game are zombies. In this survival game, you will also encounter snakes, birds, Bears, and Wolves. Some zombies are feral and move much faster and track you.

It is Minecraft with more creepy shit looking to kill you and scarier graphics. It’s possible to set up all kinds of clever kill boxes and traps for zombies. All you sadistic zombie-slaying mother F-ers may like what you find. So if you are looking for another zombie survival game that is open world and offers multiplayer 7 Days to Die is for you.I’ve poured hundreds of hours into this game, and I know many of you will enjoy it. 7 Days to Die is a game worthy of your dollar.

This is a link to the company we support they currently offer 7dtd servers for PS4 and PC, take a look they are reasonably priced. We do get a portion of the sale, it helps us keep our lights on. 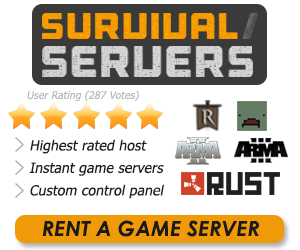 How to peek through doors in Modern Warfare